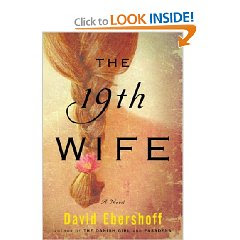 Sweeping and lyrical, spellbinding and unforgettable, David Ebershoff’s The 19th Wife combines epic historical fiction with a modern murder mystery to create a brilliant novel of literary suspense. It is 1875, and Ann Eliza Young has recently separated from her powerful husband, Brigham Young, prophet and leader of the Mormon Church. Expelled and an outcast, Ann Eliza embarks on a crusade to end polygamy in the United States. A rich account of a family’s polygamous history is revealed, including how a young woman became a plural wife.

Soon after Ann Eliza’s story begins, a second exquisite narrative unfolds–a tale of murder involving a polygamist family in present-day Utah. Jordan Scott, a young man who was thrown out of his fundamentalist sect years earlier, must reenter the world that cast him aside in order to discover the truth behind his father’s death.And as Ann Eliza’s narrative intertwines with that of Jordan’s search, readers are pulled deeper into the mysteries of love and faith.

I've lost count of the number of people I've talked to about this book. The 19th Wife is the sort of story you want to discuss with other readers - yet doing so would require putting the novel down, something that I had a very difficult time doing.

David Ebershoff has written an absolutely captivating and original novel. I started listening to The 19th Wife on audio, and actually found myself so engrossed in the story that at times I wished my nearly 2 hour commute was longer. (Yes, the book is that good.) So I borrowed it from the library and soon I was spending nearly 3 hours a day with Ann Eliza Young, Jordan Scott, and a whole cast of characters - and loving every minute of reading the more than 500 pages. I honestly could not read this fast enough, yet it was disappointing when it ended.

Ebershoff's style of writing in this novel (I haven't read any of his other work) is truly unique. For starters, he more than brilliantly pulls off the difficult task of intermingling two stories, and constructing those stories amid a series of other materials such as Wikipedia entries, research papers, websites, court documents, etc. Each of these supporting materials seem authentic, but in actuality are fictitious, written by Ebershoff himself. The fact that they appear real is a testament to Ebershoff's finesse as a writer, for he masters a variety of voices and styles with this technique.

In my view, The 19th Wife gets 5 stars. Highly recommended.


Some additional links that may be of interest:

Sounds like an interesting read. I'll have to check it out soon.

Niksmom, it really is a fascinating book. Let me know what you think of it.

Thanks for linking to the interview with David Ebershoff. This one, especially, was a lot of fun because I solicited questions from readers of the blog.

I know it was a work of fiction, but the historical background info (and the "ripped from the headlines" contemporary thread) are fascinating!

Just this week my niece went to a reading by a woman named Carolyn Jessup who wrote a book called *Escape* about her experience living in a compound like this.

Dawn, you're quite welcome for the link. It was a very good interview! I agree, it was definitely a fascinating book. I've heard good things about "Escape" so I am going to put that one on my TBR list.