Friday night, my mood was one of a cauldron of frustration.  No one thing or one person was to blame; it was (and admittedly, still is) a bwitches' brew of festering issues, personality clashes, obstacles big and small seemingly out of one's control. I needed an escape, a brief respite of sorts from all this.


So I went to the Congo. You know, the one in central Africa.
I don't watch much TV, and the last movie I saw (on TV or otherwise) was nearly a year ago. But I needed to get outside of my own head, to focus on something other than my own life for a little bit. Searching through the free HBO On Demand offerings, I found the documentary REPORTER, featuring the work of Nicholas D. Kristof, a two-time Pulitzer Prize winning journalist with The New York Times.
Before watching REPORTER, I was familiar with Kristof's work mainly through the buzz in the blogosphere surrounding his book Half the Sky: Turning Oppression Into  Opportunity for Women, written with his wife, Sheryl WuDunn. Along with upwards of 156,000 other people, I'm Kristof's friend on Facebook (and you should be, too) where he frequently posts his columns and other work.
Nick is, quite simply, an extraordinary human being and an exemplary journalist - a dying breed to begin with, but the caliber of which is nearly gone. (Case in point: my day on Friday included suggesting to someone in that field that "servicing people throughout the county" might connotate something very different than the work my organization actually does.) 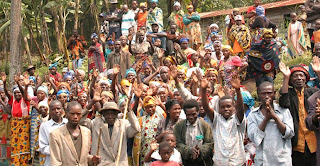 In REPORTER, we accompany Kristof into the villages of the Congo where a brutal war has been raging since 1998, resulting in the deaths of 5.4 million people.  His work, and that of his small team, is to find the one most compelling story amid millions that will make people like me - preoccupied on a Friday night with what, in comparison, are trivial, insignificant issues - care about what is happening right now to people in remote villages in central Africa.
"We've all heard that one death is a tragedy, a million a statistic, but at what point does the number of deaths become too large for our minds to process?" asks Kristof.
Nick believes - as do I now - that one's compassion is greatest when we can relate to one person, or one thing at a time, as opposed to millions.  It's easier to care about and process (as difficult as the processing is), the story of one 41 year old woman (same age as me) dying of excruciating pain of a bedsore infection.  Before the war, this educated woman had saved money; she had hope.  She had a very different plan than this. 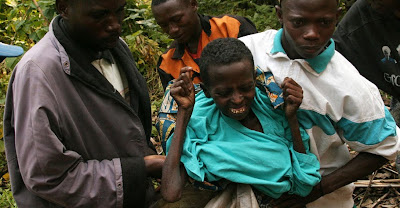 REPORTER is a must-see for so many reasons. It is not a pretty film.  It does not leave one with all that much hope. What it does leave you with, especially at the end,  is how important it is to cover issues of global poverty and how Nicholas Kristof's work of bringing the stories of Darfur, of Iraq, of Africa to our doorsteps and laptops is important. It shows us this global crisis one person and one story at a time. And while it is important to cover issues of domestic poverty, there is also a congruent urgency of needing to pay attention to issues like the ones Nick shows us, through REPORTER and his columns.
Watch the trailer for REPORTER, narrated by filmmaker Eric Daniel Metzgar.  It is currently on HBO On Demand, and comes out on DVD as of March 21.
copyright 2010, Melissa (Betty and Boo's Mommy, The Betty and Boo Chronicles) If you are reading this on a blog or website other than The Betty and Boo Chronicles or via a feedreader, this content has been stolen and used without permission.
Posted by Melissa at 12:07 PM

You know when I read his stuff I always like it, but I have a friend who has a doctorate in politics on the African continent, and is particularly knowledgeable about the DRC, and she often takes issues with him and his ideas.

The life of a reporter I suppose? ;)