The Sunday Salon: A Million Book Bloggers Can Sometimes Be Right

I'm not usually one who jumps on the latest book bandwagon and reads something just because everyone says it is the most amazing book ever.  In fact, I'm actually the opposite. If everyone is raving about how wonderful a particular book is, I tend to be even more cynical of such hype because ... well, (because I'm cynical) and because such hype has tended to disappoint me in the past.

You have to be in hibernation to not have heard of the blogger buzz surrounding Eowyn Ivey's debut novel, The Snow Child. Set in 1920, this is the story of Jack and Mabel who are grieving the loss of their stillborn child, albeit in their own separate way. They're trying to make a new start for themselves by establishing a homestead in the Alaskan wilderness, which is about as far away from Mabel's family's home in Philadelphia and Jack's family farm along the Allegheny River as one can possibly get.  During a snowfall, Mabel and Jack build a snow child ... which comes to life in this enchanting story that is based on a fairy tale.

Eowyn Ivey's prose in  The Snow Child reads like a fairy tale; it is transformative and magical and absolutely captivating.  I cannot put this down.  So many bloggers have said that this is a book that you want to savor, yet you want to read in one sitting in order to find out what happens.  They are so right.

See, this is one of the things I adore about this book blogging community of ours. I would have seen this on the New Books shelf at my library, read the description on the book jacket and seen the words "both still deeply longing for the child it's now impossible for them to have" in reference to Jack and Mabel and immediately thought NO. THANK. YOU. As someone who has gone through infertility hell, you don't forget those days too easily. Nor do I tend to seek out novels with this as a theme, but I thought I would make an exception for this.

I wasn't sure what to expect but I absolutely did not expect this - a book that I want to stay up all night to read. Seriously, this is that kind of book. I'm convinced The Snow Child is going to be among my favorite books of 2012. And this Eowyn Ivey? You keep an eye on her, too, because she is a writer worth watching and keeping an eye on.  She is going to do great things.  (She HAS done great things with this book.)

Anyway. Some housekeeping business. Since this is the first Salon of a new month, it's time for a look back at February's reading. The short month was definitely reflected in the quantity of books read, with only 4 books total.  But the quality was much better than January, which was just OK.  My four February books were:

The Forgotten Waltz, by Anne Enright

American Bee: The National Spelling Bee and the Culture of Word Nerds
by James Maguire

This Beautiful Life, by Helen Schulman 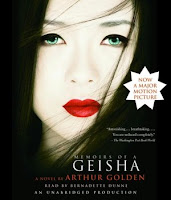 I didn't finish any audiobooks in February, mainly because I tend to listen to my audiobooks mostly in the car and I didn't have too many long drives on my work schedule this month. I'm currently listening to Memoirs of a Geisha (I know, I can't believe I've never read this!) which contains 15 CDs, making it  one of the longer ones that I've listened to.  I'm finding this fascinating, though, and even though I'm only listening to it for about 30 minutes here and there, it's definitely keeping my interest and attention.

Between that and The Snow Child, March is definitely starting off on a good note, literary-speaking. (It's also looking like a good month on the home front, but that will have to be a separate post ... maybe as soon as tomorrow.)

So funny - I just read a review of The Snow Child in BookPage this week and thought, "Nah, doesn't sound like something I'd like" and now I read your reaction after thinking the same thing! I am careful what I add to my TBR list these days (because it is over 300 books long!), but you have just convinced me to add this one.

I only just read Memoirs of a Geisha last year, too, and I loved it.

And I'm the same way about audios - it takes me forever to finish one because I am rarely alone! I listen in the car and when I cook, but often one or both of the kids are with me.

Enjoy your books this month!

Just finished The Snow Child. A Million and ONE book bloggers were right! Just stunning!